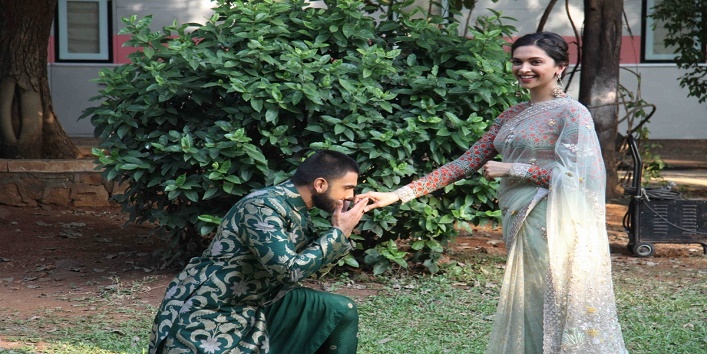 10 Reasons Why Every Girl Needs a Boyfriend Like Ranveer Singh!

I still can’t over Ranveer Singh’s hot look at IIFA 2016 and of course, his PDA for his lady love, Deepika. How we wish we were at her place. Who doesn’t like a man who’s not afraid to declare his love to his woman publicly? In this world where all the men are shying away from monogamy and commitment, he’s just like a ray of hope for all those who think true love have ceased to exist in today’s world. So while he’s busy breaking the internet, we’ll list up 10 reasons why you need a guy like Ranveer Singh in your life. 1. He doesn’t shy away from PDA
No, not in a cringe-worthy way, but in a subtle yet romantic way. He never backs away from telling all the girls that ‘He’s taken’. A few flying kisses and romantic glances won’t hurt him anyway. 2. He never fails to visit his girlfriend even if she’s miles away
In fact, they both never fails to see each other, regardless of the distance. It’s nice to see that a man is giving all it needs to a relationship. He really values the woman of his life. 3. He’s so full of energy
Who likes a dull and boring man around? No one! But Ranveer Singh is a real star! He’s never embarrassed to showcase his silly dance moves at public platforms. And the sense of humour? Nobody is unaware of that! 4. He likes coordinating colours with his BAE’s outfit can you see how he purposely wore that funny looking black and white printed jacket to match the outfits of his bae? Now those are some skills worth dying for!
5. He posts candid pictures of him and Deepika on Instagram. And don’t forget to look at the caption! Who can resist a man who’s not playing cool and is ashamed to show his love out to the world.
6. His abs! *Sigh*
And so this is how he looks when he’s not having his shirt on! 😉 irresistible much? Having such a man by your side is not something ordinary. 7. He’s not ashamed to talk about sex, AIDS or everything that’s a taboo!
See yourself what he has to say about it. “I think I was around 12 when I did it. I started everything early, everything! I was way ahead — so much so, that in school all the mothers used to say he (Ranveer) is that rotten apple that’s spoiling all our kids. I used to hold sermons with all the boys surrounding me and I used to teach them. They hadn’t heard of it and I became the expert because I had started very early,” he says with a laugh. The actor even claims that he can write a thesis on the subject. “I got into a lot of trouble but yes I had that keeda or maybe I was the keeda.” 8. He did a role in a movie for free. Just for Deepika!
Remember Finding Fanny? yes, the one playing Deepika’s husband is none other than her real-life boyfriend. And all this he did for free, free, free!

9. He stood by Deepika when she needed him the most
The time when Deepika had a spat with TOI for posting her cleavage pictures as the headlines. He tweeted this: 10. He likes to chase his girl with a flower!
Look at the expression on his face! We all just wish that Deepika turns around and express his ‘token of love’.
We just wish that Ranveer Singh starts giving coaching classes to all the men around. We’re looking forward to having a man like Ranveer Singh soon!