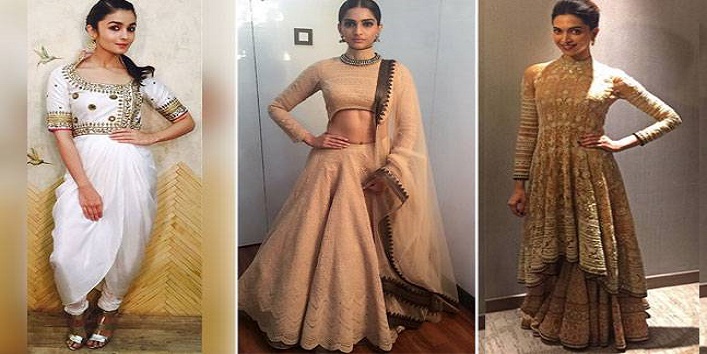 Bollywood and ethnic can never be set apart. Every Bollywood movie has at least one such scene in which the actress is seen wearing ethnic attire. And why shouldn’t it be? Every single Indian woman exudes the other-worldly charm when she dresses herself in an Indian attire. Likewise, our Bollywood Beauty Queens look splendid when they dress up in their true identity- Indian!

1. Anushka Sharma
Channa Mereya wasn’t an easy task for Anushka Sharma. Why? Have a look at the designer bridal gown she’s wearing. The costume is 20-kilos heavy. Anushka Sharma stole many hearts with her bridal avatar in Ae Dil Hai Mushkil, so she deserves to be one No. 1. 2. Priyanka Chopra
She never fails to look good in Indian attire ever. During the whole span of Bajirao Mastani, one cannot draw his eyes away from Piggy Chops! Especially in the song, Pinga, she manages to make her lovers skip a beat. 3. Sonam Kapoor
Though the actress has donned the traditional avatar many times. But her Cannes Film Festival look with a Kundan nose ring is unforgettable. I don’t find any other Indian look close to Sonam’s Cannes avatar. 4. Deepika Padukone
We have not gotten over Deepika Padukone’s India Couture Week Look. She looked absolutely resplendent in her Persian Bridal Look. The glittering deep red lehenga with an off-shoulder blouse was designed by none other than the King of Style, Manish Malhotra. 6. Katrina Kaif
When we talk about Katrina Kaif in Ethnic, we involuntarily start thinking about Nachde Ne Saare from Baar Baar Dekho. Katrina never looked so gorgeous in ethnic before this. Also Read: 10 Beauty Secrets of Priyanka Chopra That Will Blow Your Mind!

7. Alia Bhatt
Alia has adorned the ethnic look many times before. But we lost our heart to her 2 States bridal look. Her red and golden saree with Kamarbandh and Jhumkis took the internet by storm. 9. Parineeti Chopra
Parineeti Chopra posted a picture on Instagram a few days before with a caption ‘Aaj mere yaar ki behen ki shaadi hai!!’. She looked exquisitely beautiful in this baby pink lehenga with golden off shoulder blouse and a net dupatta. With close to none jewellery, Parineeti is radiating the true aura of an Indian woman.

10. Aishwarya Rai Bachchan
At a Life Cell Banking event, she wore a red saree with a black contrast blouse. The rich gold border of the saree made her overall look simple yet stunning. Her elegant sleek bun with Gold Amrapali jewellery complimented her look.