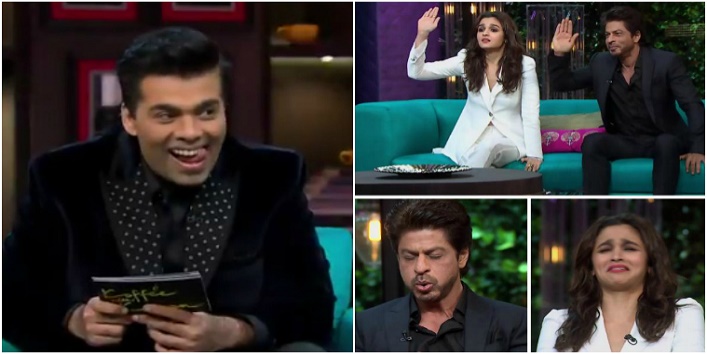 10 Times Bollywood Stars Were Too HONEST on Koffee With Karan!

Honesty and Bollywood are not as good friends. Our beloved Bollywood stars are expert at hiding things. No matter how long the paparazzi run behind them for some spicy details, they still manage to keep some things secret. But these secrets are not held for a long time. There are some daredevil celebrities who don’t shy away from revealing some shocking details about their private lives. Koffee With Karan is one such talk show, which lets the stars raise the curtain over their personal life thingies! Thus, here are some spicy and juicy confessions made by our Bollywood stars on the sets of Koffee With Karan…

Also Read: We Bet You Can’t Guess These 8 Bollywood Stars from their Childhood Pictures!

1. What is SRK’s Most Embarrassing Moment?
SRK reveals, “Karan always walks inside the changing room with me. That’s life’s most embarrassing moment for me.” 3. Akshay Kumar was asked, “who will last longer in the race of stardom – Salman, Shah Rukh, Aamir and Akshay, assuming you will outlast them all?”
Like we all know how smart and quick-witted Akshay is, he quickly answered, “If they stop smoking, SRK, Aamir and Salman will last long, else I will.” Mr. Kumar you’re definitely winning the race in the Bollywood. 4. Twinkle Khanna on “what does Akshay have that the Khans don’t?”.
Though not intended, but her answer was taking into some other meaning. She said, “Some extra INCHES!” She was talking about Akshay’s height which probably Khan’s don’t possess. 5. Ranbir Kapoor on his friendship with Ranveer Singh
What kind of answer would you expect? The answer given by Ranbir Kapoor was brutally honest and something which we were expecting, though! He said, “We’re not best friends. We’re on the show together because you called us.” 6. Shahrukh Khan on Alia Bhatt winning the General Knowledge round.
We do remember the Alia Bhatt’s blatantly stupid answer on being asked about the president of India. She was hopelessly wrong. According to her Prithviraj Chauhan was the president of India. But this time, she turned the tables on herself. She won the general knowledge round. SRK took a jab on it by saying, “Pranab Mukherjee changed your life!” 7. Twinkle Khanna got candid about her TERRIBLE acting skills.
When asked about her movie Mela, she without a delay answered, “People remember Mela only because of my terrible acting”. 8. When Parineeti Chopra commented on Aditya Roy Kapoor’s IQ!
She can’t be more honest about it. She confessed, “His brain is the size of a teaspoon”. We don’t know what made her say so, but there definitely must some reason.