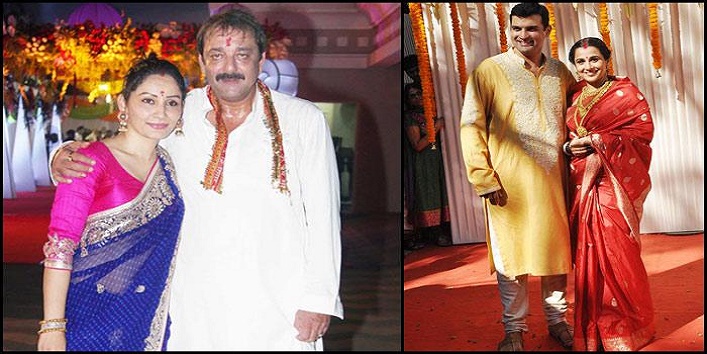 5 Bollywood Celebrities Who Got Married Thrice!

Getting married is a different thing but staying together through the thick and thins is a completely different affair. While some of the people believe getting married once is enough to spend their lives, there are some Bollywood celebrities for whom even twice wasn’t enough. They went on tying the knot for the third time to get the enough experience.

As if these celebrities were following Shakespeare’s famous adage, “Good Luck Lies in Odd Numbers”. For these celebs, their good luck worked for the third time.

1. Siddharth Roy Kapur
Siddharth Roy Kapur might not be an actor but he’s definitely more than that. He’s the head honcho of UTV motions. In 2012, he got hitched to the Bollywood Bala, Vidya Balan. His first wife was his childhood friend and his second wife was a television producer. Things didn’t work out with both of them, which eventually led to the divorce.

2. Sanjay Dutt
Munna Bhai had two wives before he married his current wife Manyata Dutt in 2008. His first wife was Richa Sharma who was snatched away by fate from him. She died due to a brain tumour. In 1998, he married Rhea Pillai with whom he parted his ways in 2005. He presently has two adorable twins with Manyata Dutt. 3. Vidhu Vinod Chopra
You will be shocked to know that even 3 Idiots producer got hitched thrice! He first married to a film editor Renu Saluja but due to some unknown reasons, he parted ways with her. He then tied the knot with Shabnam Sukhdev, who was a daughter of a short-film maker. Unfortunately, both of the marriages ended up on a bitter note. Chopra then met the famous film critic, Anupama Chopra and the duo instantly fell in love. The got married in 1990. They are together ever since then. 4. Karan Singh Grover
He’s the latest one to join the list. The model-actor Karan Singh Grover is the heartthrob of the B-Town. His first wife was the actress Shraddha Nigam whom he married in 2008. But surprisingly, he divorced her within 10 months of the marriage. Then he went to having an affair with Jennifer Winget whom he married in 2012. They parted ways in 2014. Recently, he married the film actress, Bipasha Basu in a fairy tale ceremony. 5. Lucky Ali
He’s the master of multiple talents. He himself once said that he’s not made for a single marriage. His first wife was Meaghan Jane McCleary who hailed from New Zealand. She was also seen in Lucky Ali’s music video ‘O Sanam’. He has two kids with Meaghan. He later went on marrying Inaya and had two kids with her as well. In 2010, Lucky Ali tied the knot for the third time to a British model. He has two sons with her as well!