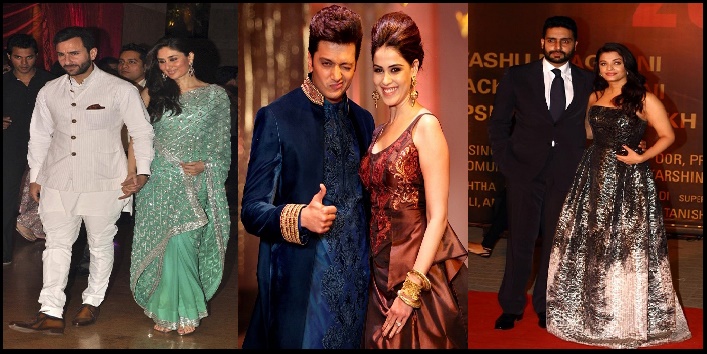 With the changing times and ideologies, these Bollywood couples inspired us with their real and inspiring love stories that are quite relatable and genuine.

Here is the list of Bollywood couples who kicked the concept of ‘love at first sight’ in real life:

The loveliest Bollywood couple who broke the sane concept of love at first sight. Riteish and Genelia tied the knot in 2012 after dating and knowing each other for a decade. They both met at the airport when Riteish was going to Hyderabad for a test shoot and Genelia was cast opposite to him. According to Genelia, she thought that Riteish was a spoilt brat as he was the son of Chief Minister of Maharashtra. But later they turned friends and look at it now they are happy parents of two kids, Riaan and Rahyl.

This royal Bollywood couple met many times but their actual love story started with the movie Tashan when they were cast together. During an interview, Saif confessed that Kareena bought stability in his and motivated him to grow emotionally, financially and professionally. The duo also moved in together before their marriage to know each other well. And now they are a happy couple and welcomed their son Taimur Ali Khan who is 6 months old.

Also read: 6 Gorgeous B-Town Couples Who Refuse To Be In Relationship

Another Bollywood couple whose love story started at the sets of the movie. The duo met first time on the sets of Aur Pyaar Ho Gaya when she was cast opposite to Bobby Deol. After three years they signed a movie together named, Dhaai Akshar Prem Ke but at that time Ash was dating Salman and Abhishek was engaged to Karisma. In 2005, the duo got close and Abhishek proposed Aishwarya in the most dramatic way in New York. Later in 2007, they tied the knot and now have a 5 -year- old daughter, Aaradhya.

A few months back Shahid broke the news in media that he is getting married to a Delhi based girl. Many hearts were broken and many questions arose that Shahid is going to marry a girl who is just 20 years old. But all the speculations went in vain when the duo become the cutest Bollywood couple. They recently made their first appearance together in Koffee with Karan where they spoke about their relationship very frankly. With the time, the duo is understanding and loving each other more and more. Now, the two have a daughter, Misha who is ten months old.

Your love, humour and madness make me keep falling in love with you every single day…Happy birthday Tina, never change ?

You know you're having a good time when you don't realise how days have passed. Last day in paradise…making the most of it ?

Akshay and Twinkle first met during a Filmfare magazine shoot where Akshay got an instant crush on her. But their actual love story started with the movie International Khiladi(1999) and they got married after two years. During the interview in Koffee with Karan, Akshay revealed the story behind the Yes for his proposal to Twinkle. She had a condition that if her film Mela with Aamir Khan gets flop then she will marry. And destiny took a turn and Mela was a flop and the duo got married. Now, this Bollywood couple has two kids, Aarav and Nitara.

So, these were the few Bollywood couples who broke the ideology of love at first sight and find true love after understanding and knowing each other well.