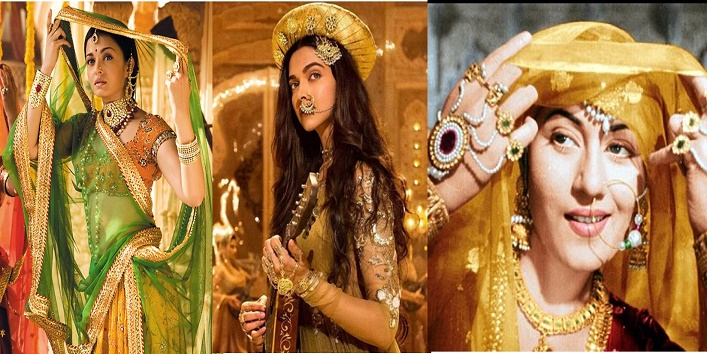 India is a heavenly abode to our rich history. So these period movies are no less than a monsoon shower on the rain-bereft earth. The aroma of earth lingers on even after it ceases to rain. These movies, regardless of their box-office reports, lingers on our minds for years. They define an era and an era can’t be sunken with time. Here are some of those handpicked period movies, which not only defined our glorious past but also redefined fashion in a whole new definition. For movies may come and go, but these period movies are going to stay forever.

1. Mohenjo Daro
The movie is already out in cinemas. You can watch the movie yourself to see what a colourful and drama-packed this movie is. After so many controversies and allegations, the Mohenjo Daro has finally made it to the silver screens. Though the neat hairdos and Neeta Lulla’s designer dresses are far beyond reality. But the fashion sense is something can’t be left unnoticed. 2. Bajirao Mastani
Anju Modi did a seamless job in this movie. When talking about the dresses and jewellery, this movie was a complete spot on. in fact, the designer travelled across Pune, Nashik, Ajanta, Paithan to know deeply about the costumes. The floor-skimming Anarkali and the headgears, everything seemed to be perfectly on the nose. 3. Jodhaa Akbar
Once again, Neeta Lulla was the mastermind behind the costumes and jewellery. Jodhaa’s choker necklaces made quite a buzz around that time. For your information, 200 of craftsmen worked day and night for 600 days to mould a 400 kg into the precious jewellery of Mughal Era! 4. Devdas
Neeta Lulla did the fantastical job in her yet another period movie. The delicately designed Lehengas and cholis made the movie quite popular in its time. Madhuri Dixit also came into limelight for dancing off in a 30 kg zardozi Lehenga for the song Kaahe Chhed Mohe while she was pregnant! 5. Baahubali: The Beginning
This movie was the most expensive movie in the history of Indian Cinema with an IMDb rating of 9.5. The designers Rama Rajamouli and Prashanthi did an award-winning job for the movie. The strapless blouses, dhoti bottom saris, the chiffon outfits, and everything else left people jaw-dropped. Such a beauty it was to watch this piece of artwork on silver screens. 6. Mughal-e-Azam
When we talk about period movies, Mughal-e-Azam continues to be the cult favourite of every Indian. Nothing has ever been made to compare the grandeur and extravagance of this movie. The exceptional costumes and intricately done artwork brought the Mughal era to life. The tailors from Delhi and Surat who were skilled in the art of Zardozi were imported to Mumbai to recreate the Mughal Magic. The Hyderabadi goldsmiths were assigned to carve the jewellery used in the movie. The crows were designed by the famous and skilled craftsmen from Kolhapur.