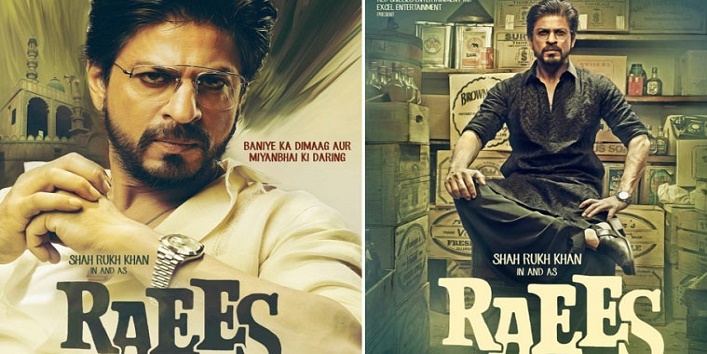 India is a country where the film industry is not only a mode of entertainment. If we closely look into our lives, the Bollywood movies have an impact on some or the domains of our life. We’re directly or indirectly affected by the Bollywood movies. In this land where people are crazy for Bollywood movies, let us discuss something about Bollywood Flicks. No, today we aren’t going to talk about the movies that you already saw or the ones which have already hit the silver screens. Today, we’ll discuss about the most anticipated Bollywood movies which are set to release in the year 2017. Are you ready?

1. Raees
Starring Shahrukh Khan and Mahira Khan, this movie had to be on the top of this list for the obvious reasons. It is one of the most anticipated movies of SRK for the year 2017. The movie is based on the real life of the criminal named Abdul Latif. It has mustered a crazy amount of public attention since the mere mention of the movie. For the fifth time in Bollywood, Shahrukh Khan will be playing the grey-shade character. The history has been the witness, that the audience loves their SRK playing the baddie! 2. Baywatch
You must be wondering why a Hollywood movie has managed to make up to this list? Read the star cast and you’ll get to know for yourself. Alexandra Daddario, PRIYANKA CHOPRA, Kelly Rohrbach are to be seen as the leads in the movie. She has been working at a frantic pace in Hollywood. From her appearance in Emmy’s Award to shooting for the second season of Quantico. She has achieved the status of a global icon with the announcement of her next Hollywood venture, Baywatch. She will be seen playing the role of a negative character in Baywatch. 3. Rangoon
Starred by Kangana Ranaut, Shahid Kapoor and Saif Ali Khan, this movie is yet another movie which is desperately awaited by Kangana’s fans. The constant delays in the release date of the movie have created even more curiosity among the fans. It is a period movie which is set in the backdrop of World War II. Shahid will be seen playing a soldier while Kangana will play the role of female protagonist. 4. Padmavati
What to say about a movie which has already taken the internet by storm. The movie has gathered a lot of attention cause of the rumour mills about a tiff between the leads, Shahid Kapoor and Ranveer Singh. But the rumours have been calmly dismissed by the duo. Deepika Padukone will be seen teaming with Sanjay Leela Bhansali for the third time. However, the details of the movie have been kept under tight wraps. It is a period movie based on the life-story of the legendary queen, Rani Padmini. Let’s see how our dimply-queen Deepika Padukone will look as Rani Padmini. 5. The Ring
Another Imtiaz Ali movie, starred by none other than the King of Bollywood, Shahrukh Khan. It is a story about Ring Khan who is a tourist guide, which is played by Shahrukh Khan. He meets a woman tourist, Anushka Sharma and story takes a turn. Evelyn Sharma will also be seen aside, Anushka Sharma. It will be the third time when the Rab Ne Bana Di Jodi couple will be sharing the silver screen. The movie is set to hit the box office on August, 11, 2017.