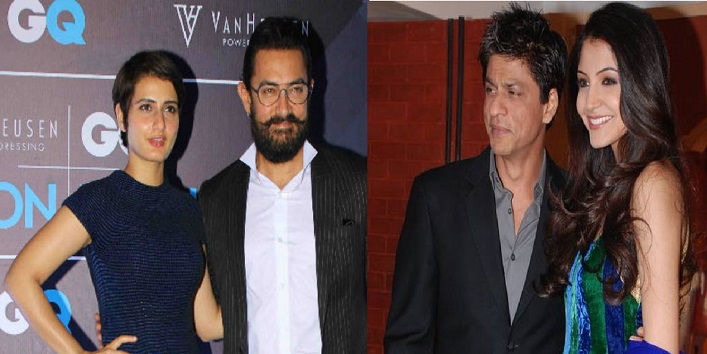 Bollywood reel couples has always mesmerized us in many ways and we fall for them involuntarily.

Bollywood has given us many classic movies which made us emotional and happy at the same time. But we should not forget the amazing acting skills of the actors who performed their roles beautifully. With amazing movies, Bollywood has given us some iconic reel couples like Amitabh and Rekha or Shahrukh and Kajol who set the screen on fire in countless movies. But many of them have stopped working together.

Apart from the sizzling chemistry, there are many Bollywood reel couples who have entertained us with their cute and charming presence on-screen.

Here is the list of reel couples who are about to reunite on-screens:

This reel couple was seen for the first time in the movie Ajab Prem Ki Ghazab Kahani and later in Rajneeti. And now Ranbir and Katrina have made a comeback on-screen with Jagga Jasoos which is the most foreseen film of the year.

Anushka started her career in Bollywood with SRK in Rab Na Bana Di Jodi and later the duo worked together for Jab Tak Hai Jaan. And now this reel couple is about to set the screen on fire with Imtiaz Ali’s Harry Met Sejal and later in Anand L. Rai’s Dwarf.

Instagram will be so much prettier now. Please welcome my friend, the lovely @katrinakaif

After Jab Tak Hai Jaan this reel couple is about to make a comeback in Anand L. Rai’s Dwarf and Anushka Sharma is also the part of this movie.

Bhumi started her Bollywood career with YRF’s Dum Laga Ke Haisha, opposite to Ayushmann Khurana. Now this beautiful reel couple is to set to make a comeback with Anand L. Rai’s Subh Mangal Savdhan later in this year.

The duo played the role of father and daughter in the movie Dangal but now they are about to play as a romantic couple for the movie Thugs of Hindostan.

This reel couple was last seen together in Dhoom 3 in 2013 and they are making a comeback with the movie Thugs of Hindostan.

We love these couples for various reasons, for instance, their beauty, style and the way they carry themselves and last but not the least, is their sizzling chemistry on and off screen.

We wish them tons of luck for their upcoming flicks.