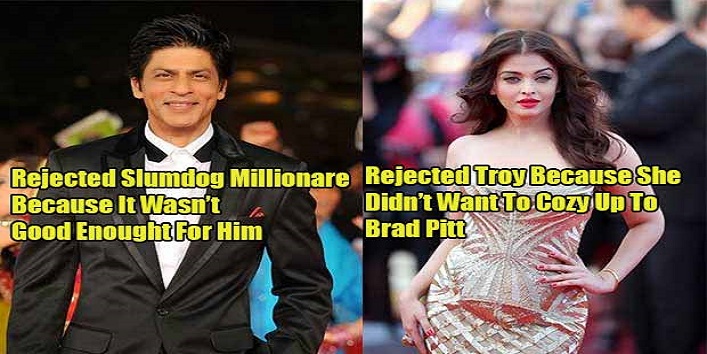 6 Popular Bollywood actors who refused to work in Hollywood

Hollywood is an industry with which everyone wants to be associated with. From actor to producers and directors too. But there were few popular Bollywood actors who refused to work in Hollywood even when they were offered with some fantastic and hit movies. The Badshah of Bollywood, Shah Rukh Khan who is best known for this charm and versatile acting refused an important role in the biggest hit movies of recent time – ‘Slumdog Millionaire’. The movie, which was directed by Danny Boyle, went on to win 8 Oscars. SRK was offered the role of ‘Prem Kumar’, the game show’s host. The commitment and dedication always pays off. And this was proved when Deepika Padukone  was shooting for the Farah Khan’s, Happy New Year. At that time, she was offered a role in the Hollywood movie ‘Fast and Furious 7’. The actress immediately turned down the role because of her work commitments. There is no doubt that Priyanka Chopra  is one the most talented and attractive personalities in Bollywood at the moment. Moreover, her styling sense and singing skills has made her a global star icon. PC was offered a role in the movie ‘Immortals’ but she refused it because of her busy schedules. Bollywood Bombshell Aishwarya Rai  was offered a role in the period movie ‘Troy’. No doubt why this glamorous actress was offered with this role opposite to Brad Pitt. However, she refused the role because she was not at all comfortable with the intense love making scenes. The handsome hunk of Bollywood, Hrithik Roshan was offered the role of Vicente in the movie ‘Pink Panther 2’ but he refused it for unknown reasons.

So, these were the few Bollywood actors who refused to work in Hollywood.