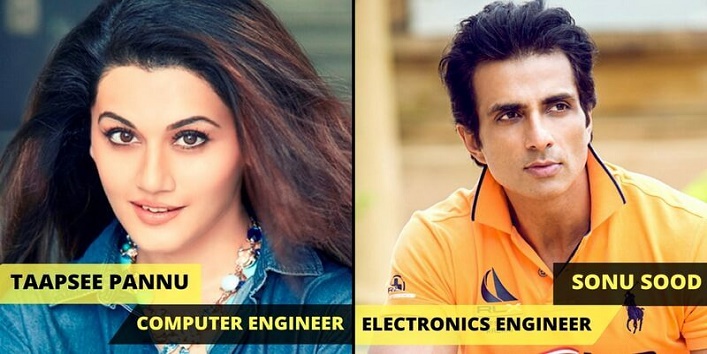 7 Bollywood Celebrities Who Hold a Degree in Engineering Sushant Singh Rajput who portrayed the role of M.S. Dhoni was the Mechanical engineering student. He made his debut in Bollywood with the movie, Kai Po Che which was also praised by the audience. The Beautiful actress, Kriti Sanon was an electronics and communication student at Noida Jaypee Institute of Information Technology. And soon she got offers for modelling and she joined it and then made her debut in Bollywood. Taapsee Pannu an actress who is best known for her performance in the movie, Pink was a computer engineer. She also worked as software professional before entering the glamour world. Sonu Sood, an actor is known is best known for grey roles in Bollywood has completed his graduation in engineering. He holds a graduate degree in electronics from Yeshwantrao Chavan College of Engineering. Who can forget Kartik Aaryan and his acting in the movie, Pyaar Ka Punchnama, and its sequel? But he didn’t give up on his studies and completed his graduation in engineering from D.Y Patil College. Ameesha Patel, an Indian actress, and model who has worked in Bollywood and Telugu movies. She made her debut in Bollywood with the movie, Kaho Naa Pyaar Hai. But before entering Bollywood, she studied Bio-genetic engineering for two years but later switched to Economics. Kader Khan, who is one of the finest comedians  in Bollywood and has acted in many super hit movies. This famous comic actor has completed his graduation in engineering and was also the professor of Civil engineering at M.H. Saboo Siddik College of Engineering.

So, these were the few Bollywood celebrities who hold a degree in engineering.