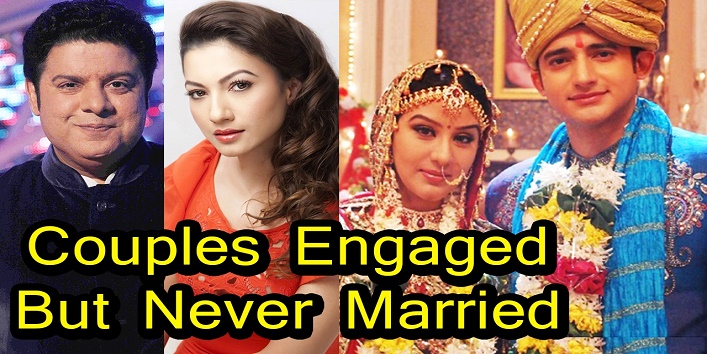 It is so mesmerizing to see your favorite celeb couple get their ‘happy ending’ after all. But unfortunately, not all of them get that lucky in love to have their happy ending in the first go!

There are a few celebs of B-town & Telly land who were head-over-heels in love with each other, but never made it to the mandap. Sometimes, it was their hectic schedules or family differences that brought in the differences in their relationship, and other times it was the love that they found in someone else.

Let’s check out those 8 celeb jodis who got engaged but never got married to each other.

Long before Karishma & Abhishek got engaged in 2002, they dated each other out in the open, but soon had to break up because of some unknown reason, that both the grand families of Bollywood decided to keep mum on. Though, earlier it was reported that the real reason behind the breakup was Bachchan not allowing their would-be daughter-in-law to work after marriage, but I guess, we will never know the truth. The same old tale of love before fame, and then hectic shooting schedules before quite dinner nights, is the story of Vivek Oberoi and Gurpreet Gill, where in their relationship, she expected a little more than simple entitlement of being a wife of a famed actor. The two broke up because there was no ‘time’ for love but busy shoots and interviews. Before Upen Patel popped the question to Karishma Tanna on the sets of Nach Baliye, the duo met and fell in love in the reality game show Big Boss, and since then, because of their outstanding chemistry, they had hosted a reality show and danced together on the beat of love. But soon after their engagement, both called off their wedding and parted their ways forever. Bollywood’s one of the most loved director, Sajid Khan and model Gauhar Khan were once engaged to each other, when none of them knew fame this well. but it certainly seems like they didn’t get along each other well and for long, so they parted their ways when the stardom hit them. Everyone knows the queen of controversy, Rakhi Sawant, got engaged to a Canada-based Businessman, Elesh Parujanwala in the reality show Rakhi Ka Swayamvar. But soon after the show’s end, they broke up because of their incompatibility with each other. Just like Rakhi & Elesh, TV actress Ratan Rajput even decided to follow their footsteps and got engaged with Abhinav Sharma on a reality show named Ratan Ka Rishta. Not to forget , that even they both called off their wedding due to some compatibility issues.

Also read: 7 B-Town Celebrities Who Chose To Remain Friends Even After Dramatic Breakups Long before Karan Singh Grover’s exes Shraddha Nigam, Jennifer Winget and Nicole Alvares came into the picture, he was supposedly engaged to his Debut co-star Barkha Bisht. They on the sets of Kitni Mast Hai Zindagi, and fell for each other soon after. The duo even got engaged in 2004, but parted their ways in 2006.

Shilpa Shinde AKA Angoori Bhabhi of Bhabhi Ji Ghar Par Hain were to marry TV actor Romit Raj in 2009, but at the last moment they called off their wedding dur to some personal differences.

Well, not that you too share this secret with us, comment in the section below and tell us how if you have any more jodis to add to the list!