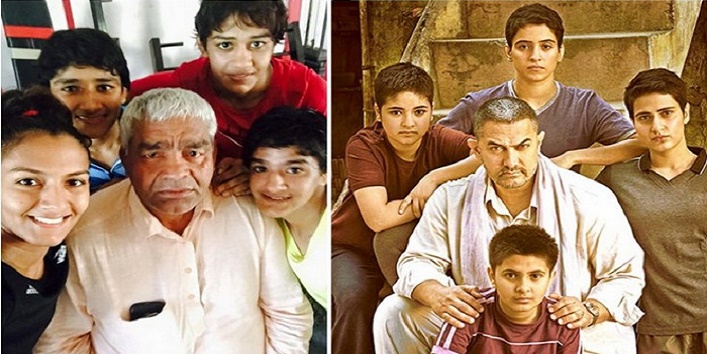 8 Reasons Why You MUST Watch Aamir Khan’s movie ‘Dangal’

Every year, we look forward to December, not for Christmas, but for the new blockbuster to get released on the eve of Christmas. December is the time for the Bollywood when our veteran stars are always scheduled to release their Magnum Opus. This year, Christmas eve is already booked by our Mr. Perfectionist, Aamir Khan. Yes, he’s all set to gift one of his best film to the cine lovers. Whenever his new release is announced, it gets very difficult to wait for the release. Completely distinct storylines and unmatched acting skills are what that make his movie worth the wait. This year, your wait is over. Dangal is all set to hit the screen tomorrow. We have more than one reasons to watch this ‘DHAAKAD’ movie. Although we don’t need to give any other reason to get you out of your schedule and rush to the nearest cinema; we’re going to give you 8 reasons to watch his movie, in case you’re still not convinced. 1. It’s an AAMIR KHAN Movie, Do We Need to Say Anymore?
Not just the fans, but the whole B-Town is waiting with bated breath for his movie to release. He’s one of those few actors in Bollywood, who believes in quality over quantity policy. Rang De Basanti, Talaash, PK and 3 Idiots are just some of the testimonies that establish Aamir Khan as one of the finest film actors in the meaningful cinema. 2. It is Based on Real Life Events
Dangal is a sports biography based on the life of Mahavir Singh Phogat who the sports coach to his two daughters, Geeta Phogat and Babita Kumari. Geeta became India’s first female wrestler to bag a gold medal at Commonwealth Games. A great legacy to take the form of a movie! 3. It is the Story of India’s First Woman Wrestler Who Secured 1st Place at Commonwealth
In a country where women are considered merely as a means of extending family, Mahavir Phogat did something mind-boggling that shook the nation. He trained his daughter with his hands-on expertise in wrestling. And the result is being applauded by the whole nation. 5. Well-Framed Dialogues
The dialogues of the movie are sufficient enough to inspire every tired soul. The humour along with the Haryanvi accent adds a tinge of humour to the movie. Let us take this example to convince you folks,

The punch line for the movie itself is empowering enough to give your goosebumps.
“Mhari Chhori Chhoron se Kam hai Ke”

7. Aamir’s Tremendous Physical Transformation
Aamir Khan is the real perfectionist of the Bollywood. For this movie, he has undergone a drastic physical transformation. He had put on a lot of weight for playing the role of Mahavir Phogat. He weighed 90 kilos when the movie was being filmed!

8. Nitesh Tiwari as Director
Do you remember Bhootnath Returns and Chillar Party? His hands-on comedy genre is too perfect to be questioned. This time, you can see Nitesh Tiwari offering a completely diverse genre with his movie, Dangal!