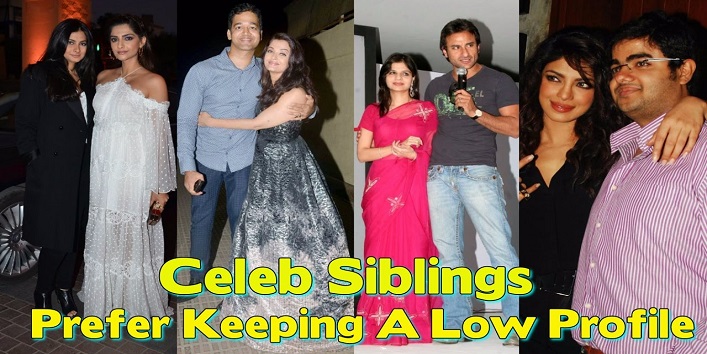 Many people confess being a diehard fan of their favourite Bollywood celebs and they know each and everything about them, but I bet there are many who don’t know much about their siblings who like to stay low profile.

Even after being the sibling of the famous Bollywood celebs they chose a carrier which is behind the camera and away from the film industry. Of course, there are few that you might hear of but there are many who are still hidden.

Also read:TELLY SCOOP: 5 TV Celebrities Who Have Gone Through A Bad Relationship

Here is the list of famous Bollywood celebs and their low-profile siblings who didn’t face the camera:

Well, you must be wondering the name sounds familiar like Shah Rukh. You guess is right guys. Shehnaz is the elder sister of King of Bollywood, Shah Rukh Khan. Being the sister of a famous Bollywood celeb, she as always managed to maintain a low-profile life.

Aditya is Aishwarya Rai’s elder brother. Aishwarya could have easily established a way for his brother in Bollywood but he had no interest in acting. He started off as a producer for the movie Dil Ka Rishta but soon stopped. Later, he took on the profession of mechanical engineer in navy.

Check out this Kapoor girl who refrained the limelight after being the daughter and sister of famous Bollywood celebs. Rhea being Sonam’s sister opted to not face the camera but she has worked behind the camera as an assistant director for the movie Wake Up Sid. And even produced Aisha and Khoobsurat which stars Sonam. Recently, the Kapoor sisters started their own fashion label too which is named as ‘Rheson’.

Being the sister of global Bollywood celeb, Anisha chose a career as a golfer. Deepika and Anisha both have excelled in their respective fields and Anisha is among the top 10 golfers in India. It’s just that Anisha easily adapted sports and Deepika to glamor.

Being the sister of famous Bollywood celeb Saif Ali Khan, she took up a career as a jewellery designer. Saba is a very happy person and likes to be away from media. Recently, Saba launched her own diamond chain and she also heads the Royal charitable trust, Auqaf-e-Shahi. Priyanka Chopra the Quantico girl has laid a foundation for her siblings to pave their way in Bollywood but seems like his younger brother Siddharth had some other plans for his career. He went to university near Geneva to pursue the culinary course and even worked as a chef. In 2014, Siddharth launched a grand pub named ‘ The Mugshot Lounge’.

So, this clears that being siblings of well-known Bollywood celebs is not enough to face the camera and enter the showbiz.