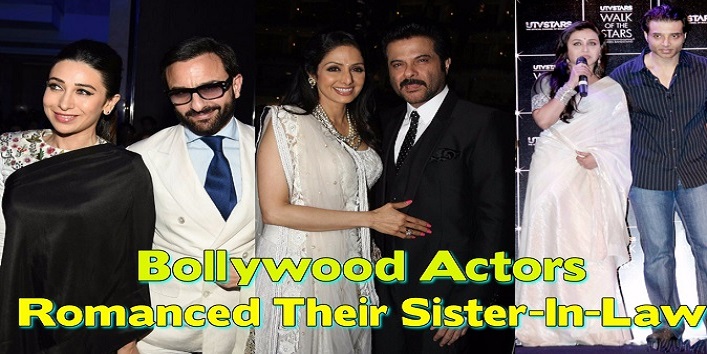 In the last few decades, we have seen many iconic couples on-screen who are related in real life. We are not talking about the ones who are a couple. We are talking about the Bollywood actors who played the role of lovers and their love interest in the flicks were their sisters-in-law.

Here is the list of Bollywood actors who romanced with their sister-in-law on-screen: Kareena and Saif are the most iconic couple in Bollywood. Back in 1999, Saif was seen romancing his sister-in-law in the Rajshri Productions Hum Saath Saath Hain and the chemistry between the two was loved by both the critics and audience. And after thirteen years of this movie Saif tied the knot with Kareena. Before getting married to Rishi Kapoor, Neetu Kapoor was seen in few movies with Randhir Kapoor. In fact, she was cast opposite to Randhir for her debut movie and the hit Jodi did five movies together. They are known as the blockbuster jodi of Bollywood. The duo has been seen romancing in almost fourteen movies and the first one was a super hit that was Mr. India. Their passionate chemistry was loved by the audience in the movies Judaai and Lamhe. We all have witnessed the passionate chemistry of Geeta Bali and Raj Kapoor for the first time in the movie Bawre Nain. And after this movie, Geeta Bali received immense success and stardom. And later she tied the knot with Shammi Kapoor in 1955.

Also read: 5 Bollywood Actresses Who Are Above 30 And Living Single Happily As we all know that Rani Mukherjee is now Mrs. Aditya Chopra but years back in 2002 she was romantically paired opposite her brother-in-law Uday in the movie Mujhse Dosti Karoge. The movie was not a huge success but the audience loved them in one frame. Naseeruddin Shah is known as one of the finest actors in Bollywood and was seen romancing her sister-in-law, Supriya in the movie Masoom. Later they were also seen in the movie Mirch Masala and Bazaar.