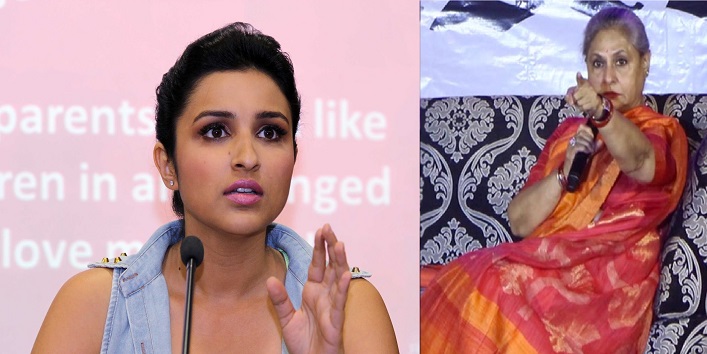 7 Bollywood Celebs Who Were Involved In A Fight With Media

Bollywood celebs are always a buzz in media for their upcoming releases, personal life, and the controversies they become the part of. But when they indulge in a fight with the media then it is surely a big buzz news which is flashed all over the TV screens and online sources.

Also read: 5 Popular Celebs Who Went To Exotic Locations For Their Babymoon

In this article, we are going to share some Bollywood celebs fights with the media which made a big news in the tinsel world.

While promoting her movie Shuddh Desi Romance, Parineeti got pissed with the sexist questions of the reporter which was quite offensive and were with the view to degrade women. After which she gave that reporter a correct answer and shut his mouth.

Veteran actor Dharmendra got into a fight with the media back in 2012 during Esha Deol’s wedding. The actor got fumed up with anger when he was asked about Sunny and Bobby’s absence from the wedding.

This veteran actor got involved in a fight with media when a reporter referred Aishwarya as ‘Ash’. And after that, she lost her patience and told them to maintain dignity and respect.

A famous publication posted an article on her cleavage show post on which she took an open note on the worldwide platform. Thereafter she was questioned about the matter. And during the promotions of Finding Fanny, a female reporter asked her why she is making this matter so big. To this, Deepika replied her in a correct way.

This Bollywood celeb is infamous for his fights with the media. Once Ranbir was leaving the restaurant in Bandstand named Olive Bistro, he was papped and it made him furious. He stopped his car and had a fight with the photographer and later snatched his phone.

This Bollywood celeb got involved in a fight with media during his visit to Shirdi. He refused all the paparazzi to enter the temple but still, they followed him and then he got furious and even pushed one of the cameramen.

Also read: 6 B-Town Stepmoms Who Share A Beautiful Bond With Their Stepchildren

After the divorce with Hrithik Roshan, Sussane was seen many times hanging out with Arjun. And it is even believed that he is the reason behind the divorce. And when a cameraman tried to snap them together Arjun got fumed and abused the reporter.

So, these were the Bollywood celebs who got into a fight with media.