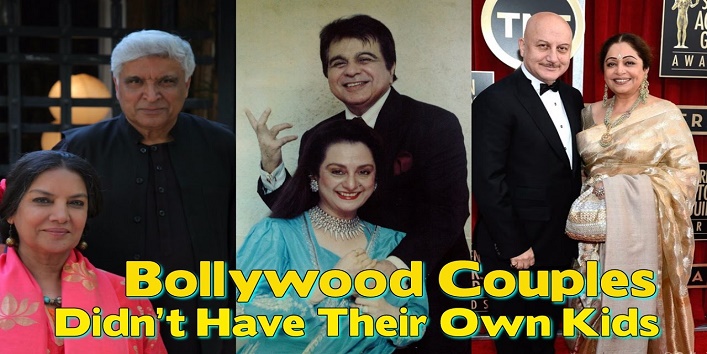 5 Bollywood Couples Who Didn’t Have Kids After Marriage

Marriage is not about having kids. It is more about companionship, respect, and mutual understanding. And there are many Bollywood couples who are the examples of this. These Bollywood couples never had kids of their own still, share a beautiful relationship. The duo is known as the legendary Bollywood couple. They are the perfect example of a long-lasting relationship. Their marriage also witnessed tough times but their love and togetherness managed to retain it. Saira Banu is 22 years old younger to Dilip Kumar and has no regret for not having kids.

Meera Kumari is known as the tragedy queen of Bollywood. She found her love on the film sets. She got married to director Kamal Amrohi who was fifteen years older than her. Kamal already had a child with his first wife and didn;t wanted to have one with Meena and later the contract ideologies resulted in divorce. The duo first met in Chandigarh and become best friends. After their unsuccessful marriages, the couple met again and then got married in 1985. Yet, Kirron had a son from her first marriage. This Bollywood couple wanted to have a child of their own but they were unable to do so even with medical help.

The duo believes that their friendship is the key element for their long lasting relationship. Yet, the couple doesn’t have kids of their own. Javed Akhtar has two children. Zoya and Farhan from his first wife Honey Irani.

Also read: 7 Bollywood Celebs Who Were Involved In A Fight With Media This Bollywood couple got married in 1980 and never had their own kids. Earlier Asha Bhosle was married to Ganpatrao Bhosle and had three children. And after 11 years of marriage, they parted and she got married to Pancham for the second time.