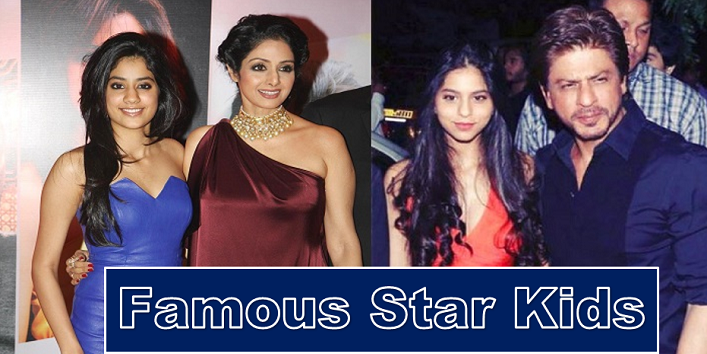 Everything is a big news in B-town from their upcoming movies to personal relationship and even their kids. In the recent time, there are many Bollywood star kids who are creating a buzz in the tinsel world and making everyone go gaga over their look and style.

Here is the list of Bollywood star kids who are a buzz in the tinsel world:

She is the daughter of Shah Rukh and Gauri Khan. And one can see from her Instagram feed that she is a Daddy’s girl. Though she is very shy but shares an acting ambition just like his father and soon Shah Rukh is going to fulfill them.

When little sis is on the list then how can we forget the big brother? This Bollywood star kid loves to party like a normal teenager and one can see from his Insta feed that he is a sure stunner. And it would not be a surprise if we see him on the silver screen.

Also read: 6 Bollywood Celebs And Their Revelations About Intimate Scenes

She is the daughter of Sridevi and Boney Kapoor. This 18-year-old chick is a stunner and is giving a tuff competition to the young upcoming models. And according to the sources, she is soon going to shoot for her debut South Indian movie.

The daughter of Saif Ali Khan and his ex-wife Amrita Singh. And according to the sources, this beautiful lady is all set to make her debut with the Karan Johar’s film opposite to Shahid Kapoor.

He is the son of Khiladi Kumar. Aarav is best known for his blue eyes and good looks. Akshay revealed that he wants his son to do well in sports and he is true to the world. He is just 14 and he made everyone go gaga over his looks.

Saif Ali Khan and Amrita Singh’s younger son is sure an upcoming star. He made his debut in the movie Tashan in which he played the role of younger Jimmy. Ibrahim loves to party and he came to talk when he was snapped with celebs daughters.