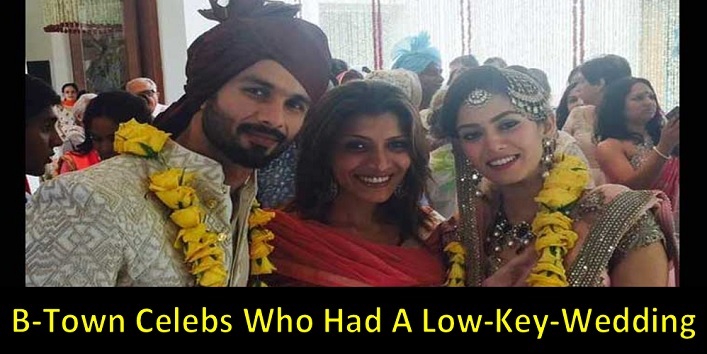 8 Popular B-Town Celebs Who Had A Low-Key-Wedding

Everything about B-town celebs is a breaking news. From their personal life to health everything is a big news. And when B-town plans to get married then it is obvious that people want to know more about the wedding venue, designers, and various other details.

But there are few celebs who wanted to keep their marriage a private affair and for this reason, they had a low-key wedding.

Here is the list of B-town celebs who had a private wedding: This couple had a very low-key wedding which included close relatives and friends in the year 2015. But the duo had a grand reception in Delhi to celebrate their togetherness. Many people got to know about their marriage when Kunal shared their wedding picture on social space. There were many rumors about their wedding plans and everyone was eagerly waiting for their marriage. But in 2014, a news broke out that they had a low-key wedding in Italy which made everyone shocked. According to the rumours, only 20 people attended the wedding from which Karan Johar and Vaibhavi Merchant were the two.

Also read: 6 Famous Celebs Who Got Married To Lesser-Known People They are considered as the most adorable couple in Bollywood. However, they had a very private wedding which included family and close friends. Later, they had a grand reception in Mumbai. The duo got married on July 7, 2015. As we all know that Johan and Priya were dating for a long time but no one expected that they would have a private wedding. The duo got married during their vacation in the US in the year 2014. Their marriage was quite a secret affair. Vir got married to his girlfriend, Shivani in the year 2014 when they were in Sri Lanka. Their marriage made a buzz when several wedding pictures of them were shared on social space. The duo got married secretly in the year 2006. And there were also rumours that even Manoj’s parents didn’t attend the wedding as it planned on short notice. After facing a series of an unsuccessful relationship, Kim married Ali Punjabi which was a quite a shocker. As people didn’t even know that they had an affair till their marriage news came out. It was quite a shocker for many when Minissha had a secret wedding with his longtime boyfriend in the year 2015. People had no clue about their wedding till Pooja Bedi congratulated them on Twitter. Later, after the tweet, she made an official statement on her wedding.