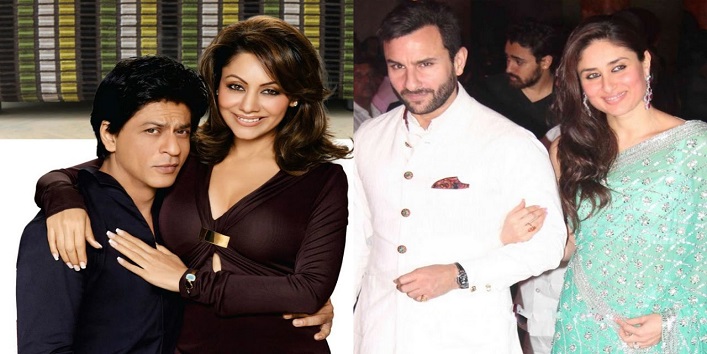 These Bollywood Khans are the true Ishqzaade in real life!

Mumbai “the city of dreams” where Bollywood resides and portrays some amazing love stories on the silver screen from a rich guy marrying a poor girl or a couple fighting against all odds of the society to be with each other, a pure display of ishqbaaz on-screens. Even the famous Bollywood Khans have played a role of true ishqbaaz in their real life by marrying a woman out of religion by facing all odds and living happily.

Here is the list of Bollywood Khans and their beautiful Hindu wives:

This Bollywood Khan who leads in the world of romance is very lovey-dovey in real life too. Yes, SRK proposed Gauri in a very filmi style of the 90s. When SRK and Gauri decided to get married, Gauri’s family was against her decision. But later all went well and now the duo is the happy couple with three kids.

Mr. Perfectionist’s love for the movies brought him close to Kiran. Kiran Rao is Aamir’s second wife and the couple seems so happy and now are the proud parent of a son, Azad.

Bollywood Khan belongs to the royal family tied a knot with the daughter of paramount Kapoor family. Most of you might guess it. Yes, we are talking about the cutest couple of B-town, Saif and Kareena.

This Bollywood Khan eloped from his house to get married to his love. Yes, Sohail and Seema ran away from their home to be with each other. We must say they were the true ishqbaaz in real life.

So 22 years ago this was the exact same spot where I first saw Malaika in Kodaikanal international school and fell madly in love . Now, still madly in love with her and my two boys to show for it. It felt quite strange standing there like as if I was on a strange timeline where past, present and future have all merged . AWESOME!!! #lovedairies #familyholidays #traveldiaries #reunions #adventuretime

This Bollywood Khan found love in his childhood buddy. Zayed and Malaika are childhood friends and when Malaika parents started looking guy for her Zayed asked her out.

Humble request to the media, stop speculating and leave us alone. Will talk when ready, please respect our privacy. http://www.dnaindia.com/entertainment/report-what-we-all-feared-we-are-separated-confirms-malaika-arora-khan-and-arbaaz-khan-2194898

On contrary to his brother Sohail, Arbaaz acted like a nice son-in-law and got married to Malaika in the church. But this couple’s love got lost and they parted their ways in 2017.

So, these were the famous Bollywood Khans who married beautiful Hindu woman.