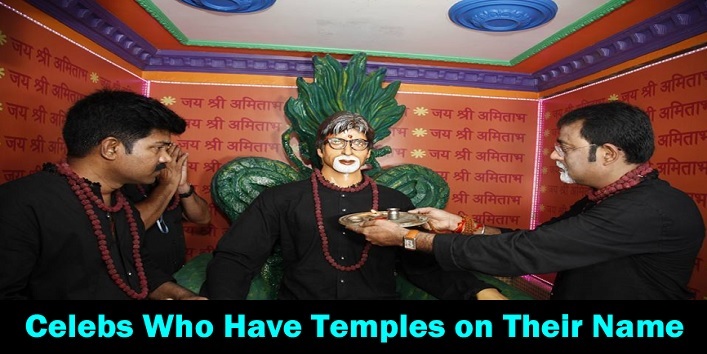 5 Celebs Who Have Temples on Their Name

Till today we have heard many stories on how a fan moved out of the way and showed his love towards his/her inspiration. But people are so obsessed with their inspiration that they have even built a temple on their names. Trust us, we are not kidding. In this article, we have shared some celebs who have temples after their names. Amitabh Bachchan is also known as the Shenshah of Bollywood has won millions of hearts with his amazing acting skills and kind gesture. His fans have shown immense towards him and even built a temple after his name. This temple is located in Kolkata. There is no doubt that our beloved Prime Minister Mr. Modi is becoming the most popular public figure with the passing days. He is the person about whom the world is talking. In Gujarat, three hundred people collected money and built a temple after his name. Rajnikanth is a star around the globe. He is best known for his amazing moves in the action scenes where he dodges bullets and beat villains which keeps his audience glued to the screen. His fans even pour milk on his posters before every big release. His fans have shown so much love towards him that they even created a Sahasra Lingam for his health and prosperity at the Kotilingeshwara Temple, Kolar, Karnataka. He is one of the finest sportsmen and known as the God of Cricket in India. No doubt he is the most loved and popular cricketer of the country. But the title was taken too seriously by his fans that they even built a temple after him. You heard it right. There is a temple after Sachin in the small village of Bihar. The statue is placed in a cricket academy where students are provided free of cost coaching. Sonia Gandhi, the president of Indian National Congress also has a temple in Telangana. The statue is built by one of the former party members.