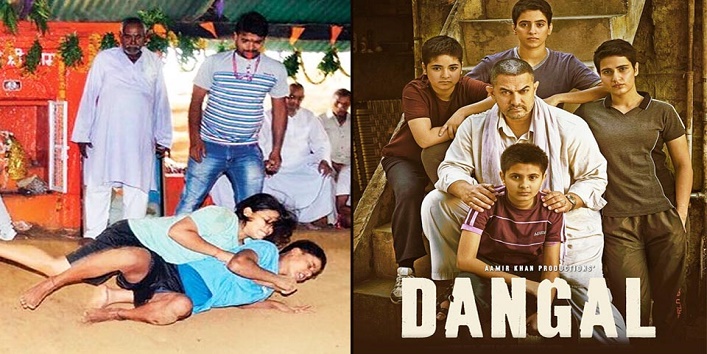 Inspired By Dangal Movie This Akhada Encourages Women Wrestling For The First Time In 478 Years!

Over the year Bollywood produces more than thousand movies and few of them are the ones which create a huge impact on masses and stay in the mind for a long time and one such movie was Aamir Khan’s Dangal. Dangal was the movie which was based on the real life story of Phogat sisters and the struggles and challenges they faced to become a successful wrestler. Post its release it seems like that the movie Dangal is showing its effect on the people. According to a report by DNA, an Akhada in UP named as Sawminath Akhada has opened doors for female wrestlers after 478 years.

1. Swaminath Akhada is located at Tulsi Ghat in Varanasi which organizes a contest for female wrestlers on Nag Panchmi named as ‘Dangal’ where many girls participate from Varanasi and nearby districts of UP. 2. The organizers of the event credit the movie Dangal for this event. In this event of Dangal, there are matches held in three rounds from which half of the girls are knocked out in each round. And at last four girls are declared as winners by Sankatmochan Foundation.

3. It is believed that Tulsidas who composed the holy Ramcharitmanas was the person who first started the Dangal on the bank of Ganges.And since that time Sawminath Akhada came in function and has given our country amazing wrestlers like Kallu Phelwan.

4. In an interview with DNA, Kallu Pahalwan’s granddaughter, Palak Yadav who is also the winner of the contest stated that she felt amazing to wrestle on the ground where her grandfather practiced. She also told that many girls in UP are taking up wrestling after watching the movie Dangal. 5. Dr. Vishambar Nath Mishra, the man behind the idea to encourage women wrestlers, is a professor and Mahant of Sankatmochan temple in Varanasi. He is one of those who wants to break the stereotype concept of the society.

6. Even his brother Vijaya Nath Mishra said “That the house in which they live is the place where Rani Laxmi Bai was born in Varanasi. And they wish that women wrestlers take on the pride and bravery of Laxmibai forward.”

And after reading this I’m sure, most of us can feel that finally, a new ray of hope is emerging to break all the stereotypes and odds of the society and giving Indian women a chance to fulfill their dreams.

Hails to the womanhood!