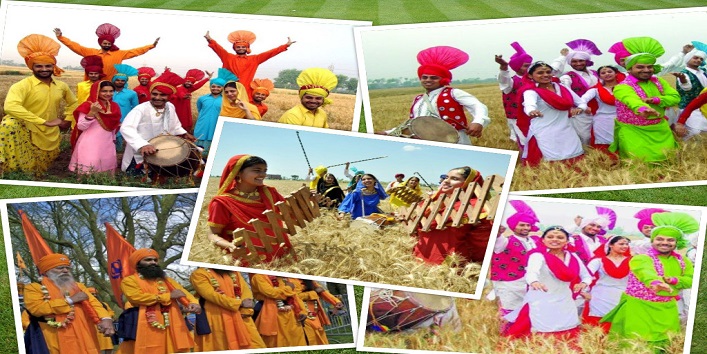 Did You Know These Interesting Facts About Baisakhi Celebration!

India is famous for its colorful festivals and the energy of celebration that every Indian possesses. Being an Agricultural nation, where multiple crops are flourished, in various regions of the various parts of the country, harvesting of crops is celebrated on high level. From Prashad to Bhandara, Gidda to Bhangara, this festival is celebrated with full enjoyment and happiness. Here are some unique and interesting facts about Baisakhi that you might be unaware of:

It Marks The Beginning of the Sikh’s New Year Although Baisakhi is mainly celebrated for the harvesting of the new crops, but it also marks the beginning of the Sikh’s New Year as well, as per the regional calendar. The day is celebrated in a ceremonial way, with complete pomp and show, as the sun moves in the month of Aries on 13th or 14th of April, marking a new beginning.

Celebrated In The Honor Of Forming Khalsa Panth Another important reason of celebrating this day is that the Khalsa Panth was formed on the third day. It is said that Guru Gobind Singh gathered a crowd and asked for the volunteers to give up their life for the sake of humanity’s protection.

It was after that, five men stood up and happily agreed upon Guru Gobind Singh’s sacrificial demand and they went into the tent one by one. As Guru came out with a bloodied sword every time, the crowd got furious that their Guru took the lives of 5 innocent men. But a few minutes later, he came out with all the 5 men, living and breathing safely, and it was then, that he announced those 5 men as the Panch Piyares (The Five Dear Ones) of the almighty. Hence, the formation of Khalsa Panth, aiming to protect the Sikh and Hindu communities from the cruel Mughals.

It Marks The Celebration Of Cluster Of Events Baisakhi is a month of celebrating cluster of events. Other than celebrating Sikh’s New Year, it marks the birth celebration of Second Guru, Sri Angad Dev. Also, as per the Vikrami Era, the coronation of King Vikramaditya was held on this day, the festival of Navratri begins on this very day, and Khalsa Panth and Arya Samaj was formed on this day.

According to our Hindu Mythology, Lord Brahma began to create the universe we are living in. As per the ritual, nectar tasting is the most important event of Baisakhi. On this very day, Guru Gobind Singh made Amrit in an iron vessel, by the Batashas his wife gave to give and swirling them with his mighty sword named as Khanda Sahib.

He first served the Amrit to the Panch Piyares and then distributed it among lord’s devotees, right after the enchantment ritual of Guru Granth Sahib. This is considered the most auspicious day for the Sikh community, as they offer their prayers to the almighty and thank for everything they have. Also, seeking prosperity for their family & friends and the near ones for their happy future. Just like any Indian festival, Baisakhi is also celebrated with joy and happiness, full of colors and serving delicious Punjabi dishes. Baisakhi Mela is the main attraction that everyone looks forward to indulging in. from toy shops to food stalls, to ferries, you will find everything of high interest in Baisakhi Mela.

Also read: From FLAB to FAB, The Weight Loss Journey Of Bhumi Pednekar! The saddest day in the history of India, when hundreds of Sikh’s were massacred at Jallianwala Bagh in 1919. It was on this same day of Baisakhi, that General Dyer ordered the cruel massacre of such great souls and also on this very day Udham Singh took an oath to kill General Dyer for revenge of his dear one’s death.