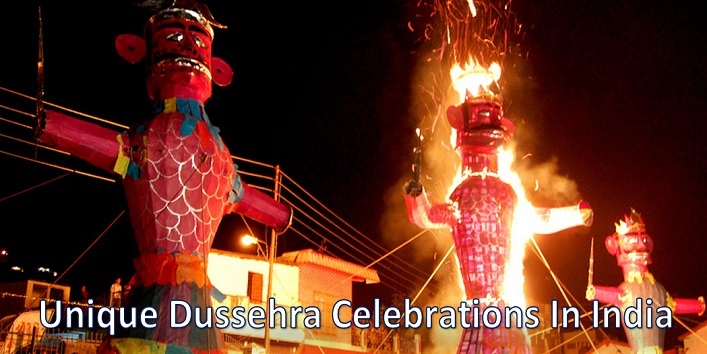 Dussehra is a very famous Hindu festival which is celebrated at the end of Navratri every year. This festival is celebrated for different reasons in various parts of India. Like for some people, it is the end of fasting and for some, it is marked as the Ravan Dahan in the local mela. But in few places, it is celebrated in a unique way. So, in this article, we have listed five best and unique Dussehra celebrations in India. If you really want to enjoy the spirit of Dasara then you should visit Mysore. In Mysore, the ten-day long festival is celebrated by the royal family, The Wodeyars. A unique thing about this Dasara celebration in Mysore is the Jumbo Savaari for which the royal elephants are decorated. The savaari starts from the palace and ends on the parade ground. Besides this, the Mysore palace is decorated with more than 100,000 lights and an exhibition named as Dasara exhibition is also held which includes all fun rides, food, and shopping stalls. In Gujarat, Navratri is celebrated with great zest when Goddess Durga is worshiped for nine days. During these nine days, people wear beautiful traditional dresses and enjoy garba and dandiya. So, if you are in Gujarat then don’t miss to take part in garba dance and have fun this Dussehra. During Navratri, Kolkata is in a crazy festive mood. During Durga Puja, you will find amazing themed pandals, idols decorated with beautiful lights. People dress up in their unique Bengali look.

This festival is full of culture, art, music, and food. The things you can’t miss out if you are in Kolkata this Navratri:

• The beautiful crafted Durga pandals.
• Dhaak and Dhunuchi performed during the evening puja. Dhunuchi is mud vessel which is full of fire and people dance holding the vessel in their hand or mouth on the dark beats.
• And you can eat a lot of food especially the egg rolls which is very famous in the city.
• Married women play Sindoor Khela on the last day of Puja.
• And at last, the Durga idol is immersed in the river with lots of music, fireworks, and dance. In Delhi, it is celebrated as the day when Lord Ram killed evil Ravana which also considered as a victory of good over evil. For this day, the temples are decorated and Ramlila is performed and later Ravana is set on fire. Many people gather to witness the amazing fireworks. Kullu is known for its unique Dussehra celebrations. People from all the nearby place carry the idols of gods and goddesses on their head to gather at a common ground to meet the deity of Lord Raghunath. During seven days of Navratri, this beautiful valley is seen in festive look. And on the final day, procession heads to the Beas River where people set a pile of wood and grass on fire which symbolizes the burning of Lanka lake.