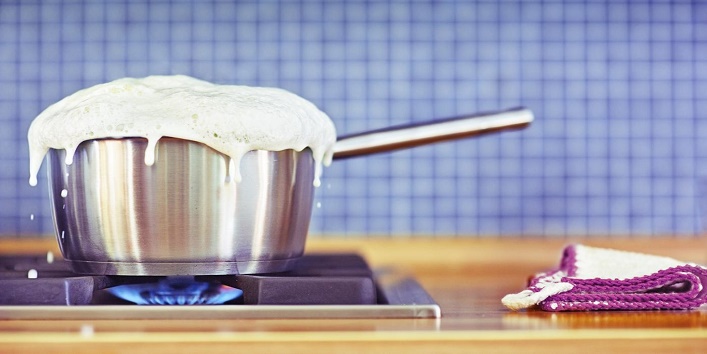 How to Prevent Milk Boiling Over: 6 Amazing Tips

But this doesn’t mean that you can forget about the milk kept on the gas stove for the whole day. We are introducing this trick to you just so as you can prevent your milk spilling out on gas in case you are busy somewhere else. So come let’s know what the trick all about is.

1. The first trick is to rub a bar of butter on the rim of the vessel in which the milk has to be boiled. This way the boiled milk will never come out of the vessel. 2. The second trick is simply adding some water to the vessel in which the milk has to be boiled. Now add milk in the vessel and keep it for the boil. The milk will never boil out on the gas stove. 3. When you see that the milk is about to boil out, then instead of turning off the heat, just lift the vessel and shake it a bit. The boiling milk will settle down a bit. 4. Sprinkle some water on the foam coming out of the boiling milk. The milk will not spill out.

5. Keep a wooden spatula over the vessel while boiling the milk. The milk will never boil out. 6. Take a larger vessel as compared to the quantity of your milk. Add some water to the vessel and then milk, this will prevent the milk from boiling out.