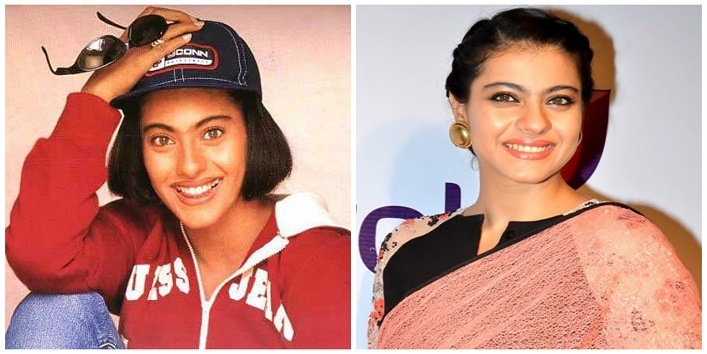 Kajol’s Incredible Journey To Being A Fashion Diva

When we talk about fashion, one thing that pops in our mind is B-town actresses who put up their best look forward. Some become the fashionistas and few ones fail because of their style. Still, they try to be in the best-dressed column. But there are many celebrities who have changed their style and improved looks with the time and one such celebrity is Kajol.

Kajol has worked a lot on her looks and style over time. Now, she looks more glamorous and radiant than before and is always in the limelight for her looks.

So, let’s have a look at the makeover journey of Kajol that made her the diva of B-town. Kajol‘s natural looks were always admired by many and even her dusky complexion was also loved by all. And later she was seen with a fairer skin tone and rumours spread regarding her skin lightening treatment. To which she revealed that her skin tone is like this because of de-tanning not because of surgery. For a long time, she was away from the latest trends and was mostly seen in suits, saree, kohl eyes, ponytails, and bakes makeup. She never paid attention to what she was wearing, for her clothing was all about comfort. But thanks to her stylist, Triparna Majumdar, who added a style quotient to her looks. Because of her, she was seen in whole new avatar with new hairstyles, bold makeup, and amazing outfits. Seems like the tinsel celebrity was in the mood for experiment and Majumdar made sure that she looks perfect in all her looks when she steps out. Kajol not only worked on her looks but on her fitness too. Though she was not too fat now she looks fab in her fit and slimmer avatar and looks younger. During an interview, she said, “I worked out a lot and spent a lot of time in the gym and managing my diet that has worked for me.”

Well, now we can say that all her efforts have paid well in making her more radiant and the fashion icon because of her complete transformation.