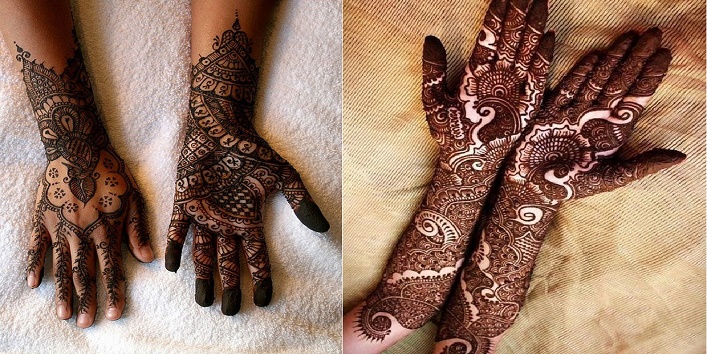 A bride isn’t complete without her hands stained in mehndi. Whether we’re talking about Pakistani, Indian or an Arabic Bride, a typical wedding ceremony is incomplete without henna. So here are some beautiful mehndi designs for hands and feet to sweep your bridegroom off his feet.

Mehndi is derived from a small shrub known as Lawsonia Inermis which is around 4 feet high. The plant is typically found in Asia and Africa.

The mehndi derived its name from a Sanskrit word, Mendikha. In Indian weddings, mehndi is a customary ritual that adds charms to the beauty of a bride. Apart from weddings, Mehndi is also applied on Teej, Ramzan and Karva Chauth.

Even the Bollywood stars are seen sporting beautiful mehndi designs on their palms and feet on their wedding. In Somalia, the mehndi is red and black in colour as compared to the reddish-brown hue of our mehndi. Even the Hollywood celebrities like Madonna and Demi Moore were seen wearing mehndi with panache.

Also Read: 9 Ways To Ensure That Your Mehendi Is Dark And Beautiful Nowadays, the bridal mehndi is modified by adding Swarovski crystals and glitters. There are different varieties of mehndi designs like motifs, flowers, peacocks, vines and geometrical designs. Some women even prefer having the face of the bridegroom in their mehndi designs. Remember, Divyanka Tripathi’s mehndi design? The fingertips in comparison to the rest of the palm are dyed in mehndi to create a contrasting impact. Bridegroom’s name initials are also printed on the mehndi design. The idea of the bridal mehndi is to simply draw the couple closer to each other. Mehndi is also said to have healing powers. It has the ability to cure skin diseases, hair thinning and putting down the temperature of the body.