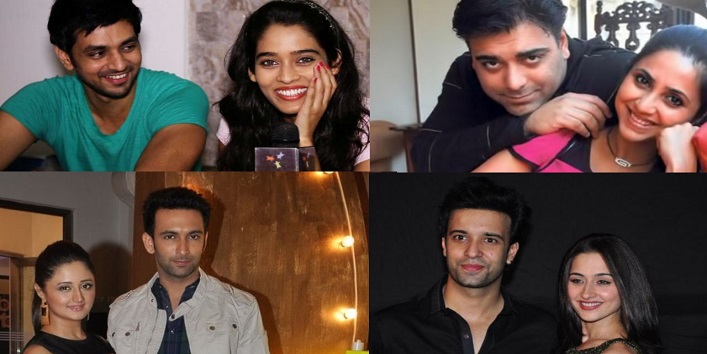 Love is a beautiful feeling. When you fall in love, you start enjoying everything. It’s very common that when you start spending time with someone, you understand each other’s feelings and get to know almost everything about them. Sometimes it happens that you start liking or fall for them.

Television’s actor spends at least 8 to 10 hours with each other on sets. And this way they start knowing each other well. So, it’s quite possible that they get infatuated for their co-stars.

Scroll down and know who they are:

They got secretly married in 2006, even their families didn’t know about their marriage. In 2011, they participated in a dance reality show, named Nach Baliye and announced their marriage. Debina came to Mumbai for a talent hunt contest. The first time she met Gurmeet there. Gurmeet is also a friend of Debina roommate’s boyfriend and he officially introduced to her. Sushant Singh Rajput and Ankita Lokhande are also known as Manav and Archana, a very famous character of Hindi serial, “Pavitar Rishta”. During the show, they fall for each other and start living in live-in relationship. But after 6 years of relationship, they get separated by unknown reason. Rashami Desai and Nandish Sandhu met on the set of a Hindi serial, named “Uttaran”. They start dating each other and got married on February 2011. But after 6 years of marriage, they got a divorce in 2016. They both first came together on the show of Sony, seven. But when they came in another Hindi serial named Maryada, and they fall for each other. They finally decided to get married. One of the most good-looking couples of the TV industry. They started as friends but later realize their feelings for each other. Together, they worked in many serials. In 2012, they decided to get married. A well said a line that “opposite attract”. This couple is the best example of this. Gauri is very shy in nature and on the other hand Hiten who is the fun-loving guy. They acted together on the Ekta’s very famous show “kyunki Saas Bhi Kabhi bahu Thi”.

Also read: TELLY SCOOP: 5 TV Celebrities Who Have Gone Through A Bad Relationship Ravish and Mughda met each other on the set of Satrangi Sasural, and start liking each other. After spending more time, they finally decided to get married. On 14 December 2016, they tied the knot.