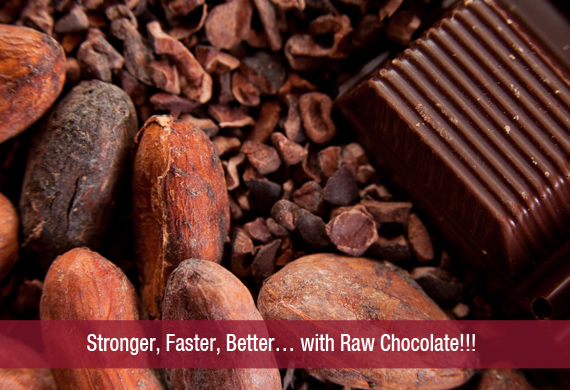 Most of us can think of few foods we crave more often, or more intensely, than a rich, dark, seemingly sinful bar of chocolate. When we are on strict diet or exercise program, however, chocolate is precisely the one food we tend to leave out, perhaps from the fear that its normally high caloric/sugar count can cause us to pack on unwanted pounds, thereby steering us away from self-esteem that comes from feeling and looking our best. But what would you say if you knew that there was one type of chocolate that could actually boost your performance, beautify your skin and best of all, and help you stay trim despite offering one of life’s most pleasurable indulgences? It’s called raw chocolate, a beautiful dessert that you can quickly whip up in the comfort of your own home. In this short blog post we provide you with a few reasons why, when it comes to raw chocolate, it pays to give in to sweet temptation.

You may be asking yourself what the study means to humans. The answer, say the researchers who conducted the study, is that similar results can be achieved if we consume just half a square of the average chocolate bar daily. Consuming too much chocolate, they said, could actually undo benefits, by overloading our muscles.

Why Is It Good To Eat Dark Chocolates?

An important proviso when it comes to using chocolate to boost endurance is that it should be dark chocolate (i.e. above 70 per cent) and, if possible, it should be raw. This is because most commercially available chocolate actually contains very little chocolate: the average bar contains 50% refined white sugar, 30% milk solids and just 20% real chocolate! Moreover, commercial chocolate has usually bees heated at very high temperatures, a process which wrests vital benefits from the raw cacao bean. In addition to epicatechin, raw chocolate also contains phenylethylamine (PEA), often referred to as the “hormone of libido” because it increases the sex drive.

If you feel inspired to take up the raw chocolate challenge, you can either head for your favorite health store to stock up on the dark, good stuff, or make a batch yourself! You can make a full tray in as little as half an hour; there are wealth of interesting websites that provide all the recipes you could wish for. Once you learn the basics of chocolate making, raise the health factor by adding nuts, dried fruit and even essential oils to your standard recipe; we are sure your love affair with chocolate will last a lifetime.