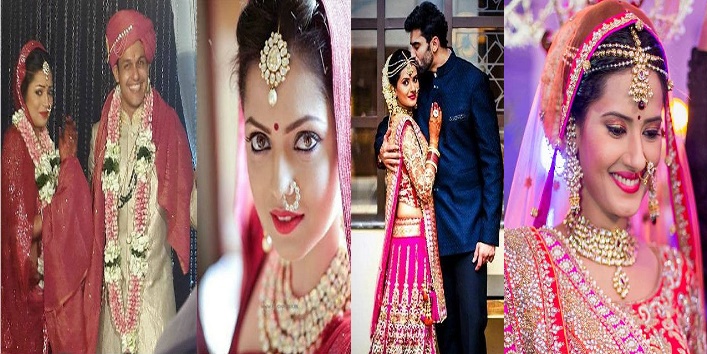 Every bride wants to look her best on her wedding day for which she starts preparing for a long time right starting from her clothes to different accessories and jewellery.And for the Indian bridal attire jewellery plays a very important role. Jewellery is not just a few pieces of metal, gold or rubies but it is a thing that adds spark to the overall look of a bride.

Here are some stunning jewellery is worn by TV actresses: Aamna Sharif wore a beautiful red and peach lehenga designed by Sabyasachi on her wedding. Just like her beautiful lehenga, she wore polki jewellery which made her look like a princess. The mattha patti and the haath phool added more grace to her look. Kishwer’s wedding was quite a buzz in media and so was her wedding look. She opted for a modern bride look with a traditional polki jewellery which gave a contemporary look to her attire. Kartika who is popularly known as Jhansi Ki Rani in TV world. She wore a beautiful lehenga on her wedding with a Kundan and gold jewellery. Her jewellery had dark pink stones which complemented her attire well. Dhrashti looked stunning in her bridal attire. She wore a marsala coloured lehenga with the Polki jewellery. Her earrings, Nath and necklace were quite similar because of the pearls which made her look more pretty.

Also read: 6 Bollywood Makeup Looks That You Should Try Divyanka looked beautiful and cute in her wedding attire. On her wedding, she wore a traditional red lehenga and paired it with gold and Kundan jewellery. Her baalis and maang teeka complemented well with her attire. Sanaya wore a golden lehenga on her wedding day with a royal polki jewellery. Her neck piece was made with fair pearls and the earrings were also made with the same manner. To balance the look she wore a simple maang teeka and nath.