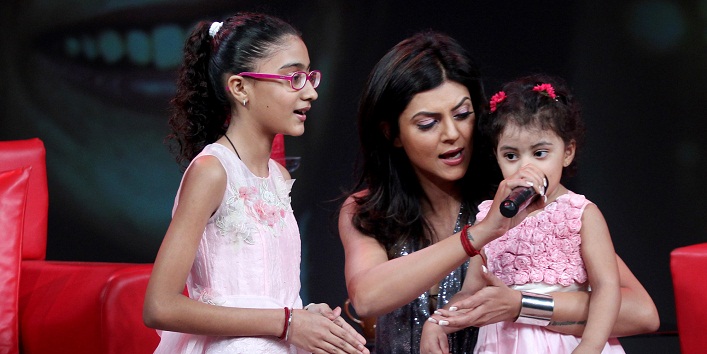 This Mother’s Day, Lets Salute the Motherhood of These 8 Single Mothers!

Motherhood has never failed to surprise us, with its selfless love. Mothers are the divine creatures. They don’t fit the definitions of a normal homo sapiens. Can a human be so selfless to put someone before his own needs? Perhaps, no. This is the reason why I personally put mothers under the category of ‘Divine Beings’. And my greatest respect goes to those valiant women who have efficiently played the role of mothers as well as fathers to their kids. With no one on their side, how these women defied all odds and broke the stereotype that a woman needs a man to complete her. Have a look at these 8 single celebrity mothers who are so inspiring that everyone can draw inspiration from them.

1. Karisma Kapoor
Though married once, she is now living a life of a single mother to her daughter and son. Despite having an ugly spat for divorce with her ex-husband Sanjay Kapoor, she never let her kids be dragged into all those scuffles. There are many women who hold themselves back in an abusive marriage just for the sake of their children. Some even succumb to the pressure of the society. But Karisma became the one to break all the barriers. She proved that you don’t need to sacrifice your own happiness for the sake of society. 2. Sushmita Sen
No one is unaware of Sushmita Sen’s inspirational story. She chose to be a mother instead of being a wife to someone. She never felt the need to be married to establish herself as a mother. She adopted two girls without getting married. She’s been upbringing them solely with no help from anyone else. You can look at her picture and you won’t feel the need of someone else to complete their ‘Happy Family’ picture. She is strong enough to inspire all those women who want to cherish motherhood without a spouse. 3. Urvashi Dholakia
None of us have forgotten the role of ‘Komolika’ in Kkasauti Zindagi Kay. Or have you? We all know how great of an actor she is. But not everyone knows that she is a proud mom of twin sons. In fact, she became a mom to these kids when she was just 17! She got hitched in a little age of 16 and gave birth to her sons at an age of 17. But unfortunately, she parted her ways from her husband soon. And ever since then, she never looked back. She got many backlashes for her background, but she was never going to stop anyway. Kudos to such women! 4. Shweta Tiwari
After having a messy brawl with her husband who used to torture her both physically and mentally, she decided to part her ways from him. Although she has now remarried Abhinav Kohli. But before that, she was a single mother to a daughter Palak for since then. She supported herself and her daughter financially by working in the TV industry. Those who are bearing the brunt of domestic violence can learn a lot from this woman. 5. Kamya Punjabi
Though she has always played the role of the evil vamps on the television, but she is a complete paradox in her real life. She is a single mother to a daughter. She has filed a divorce with her husband Bunty Negi and now fostering her daughter single handily. 6. Neena Gupta
Who doesn’t know Masaba Gupta! The hotshot fashion designer. But in case you don’t know, she is a daughter of the famous television actress Neena Gupta. Neena Gupta had a kid out of wedlock with Vivian Richards, a West Indies cricketer in 1989! You can imagine how hard it must have been for her to take such a difficult step back in the 80s! But we can all see how she raised her daughter solely and made her one of the most prominent face in the world of fashion designing. 7. Amrita Singh
Saif Ali Khan’s ex-wife has now brought up her children Sara and Ibrahim solely. After the divorce, she took the guardianship of the children and ever since then, she’s been nurturing them alone. She even tried to revive her Bollywood career after the divorce. Recently she was seen playing the role of Arjun Kapoor’s Punjabi mother in the movie, 2 States.