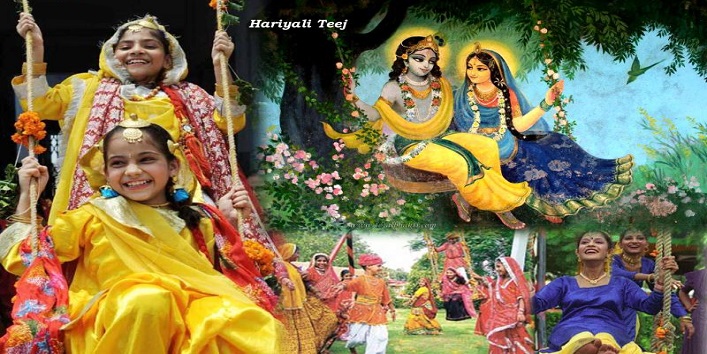 Hariyali Teej is one of the most important festivals for the North Indian. All the married women celebrate it with utter joy and devotion. It is celebrating especially in Uttar Pradesh, Madhya Pradesh, Rajasthan, Bihar, and Punjab.
Hariyali Teej which is a festival of swings is celebrated by all Hindu. Even those who live in Nepal celebrate this day with all their hearts and happiness.

Let’s know more about the significance and the importance of Hariyali Teej:

1- When to celebrate Hariyali Teej? Hariyali Teej is celebrated in the name of beginning of monsoon season. According to mythology, it is said that goddess Parvati was kidnaped by her friend from her marriage to save her from unwished marriage. Mata Sati reincarnated as 108th birth in the form of Parvati and the daughter of Parvata Raj. Narada Muni comes at Parvata Raj’s palace to talk about Parvati and Lord Vishnu’s marriage. Parvata Raj agreed for marriage but Parvati starts crying because she had already considered Lord Shiva as her husband.

So, her friend helps her and kidnaped her and took her to somewhere in mountains. Here Parvati builds a Shiva Linga and starts worshipping him. Lord Shiva arrives and fulfilled her wish. As per mythology, people celebrate lord Shiva and goddess Parvati’s marriage on Hariyali Teej.

Also read: TEEJ SPECIAL: 16 things that are a must in shringar for Hariyali Teej In Braj Mandal, people celebrate this as a celebration of the love that shared by Load Krishna with Mata Radha. They decorate all temples and set the swings and narrate the leelas of Lord Krishna. Hariyali Teej celebrated in monsoon season. As we know this season comes after summer and people enjoy the rain. For whole India, Sawan is considered as a holy month which brings prosperity in everyone’s life. It is believed that if rains are good in this season, it brings a better harvest in the future. For this reason, in many regions, it is a season of sowing and tilling. As per mythology, on Hariyali Teej, people celebrate the marriage of Lord Krishna and Mata Parvati. Women pray for their husband’s health and long life and unmarried girls pray for a husband’s they want.