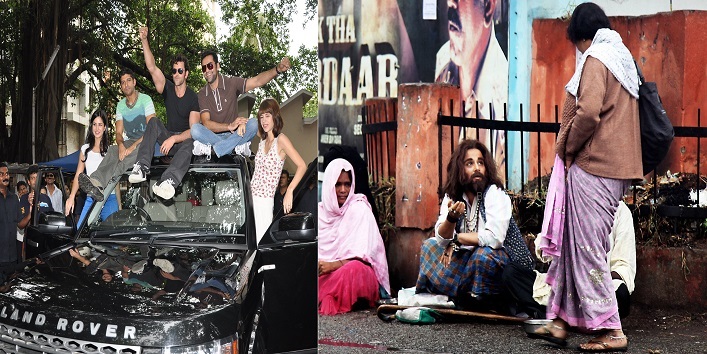 7 Creative And Strange Promotions Bollywood Actors Did For Their Movies

Indian film industry is one the biggest film industries in the world by producing over 1000 movies in a year. But the big name associated with the movie is not enough to grab the attention of the masses. For these, many Bollywood actors adopt several creative ways to promote their movies like going in the events, traveling throughout various cities, dub mashing and much more.

The main aim of the promotional activities is to create a buzz about the movies before their release and persuade the masses to watch the movie.

Here is the list of most strange promotions ideas used by Bollywood actors to promote their movies: This Bollywood actor opted for a very strange promotion idea. For the promotion of Razz 3, Bipasha Basu was distributing lemons with green chillies to her fans because the movie was based on superstitions. This promotion idea was a quite a shocker for many. Bollywood actor, Alia Bhatt announced her engagement on social media by posting an invitation which was later revealed to be a promotional stunt.

Also read: 6 Famous Bollywood Reel Couples Who Are Going To Reunite On Screen Zindagi Na Milegi Dobara is a movie which was based on the plot of friendship goals and with the same idea the cast went out on a road trip from Mumbai to Delhi to promote their movie. These Bollywood actors really made the promotion fun. This Bollywood actor who is known for his perfection also has great marketing skills. Yes, we are talking about Aamir Khan who is a pro at promoting his movies like shaving people’s head for the movie Ghajini or the stereo poster for the PK.

Also read: 5 Celebs Who Rocked The IIFA 2017 With Blacks And Camouflage For promoting their movie Tamasha, these Bollywood actors travelled from the train to promote it and of course, this promotion grabbed a lot of media attention. This Bollywood actor found a very interesting way to promote her movie. Vidya Balan chose to disguise as a beggar for the promotion Bobby Jasoos. For this promotion, she sat among other beggars with a proper disguise at the Hyderabad Railway Station. And was even scolded by a woman for not working and finding an easy way to earn money who mistook her as a beggar. When the movie includes the name Shah Rukh Khan does it need any other promotions? Still, SRK has different thoughts and to promote their movie Happy New Year the whole cast participated in the Slam World Tour which went for a month.

So, these were the few Bollywood actors and their strange promotional ideas.