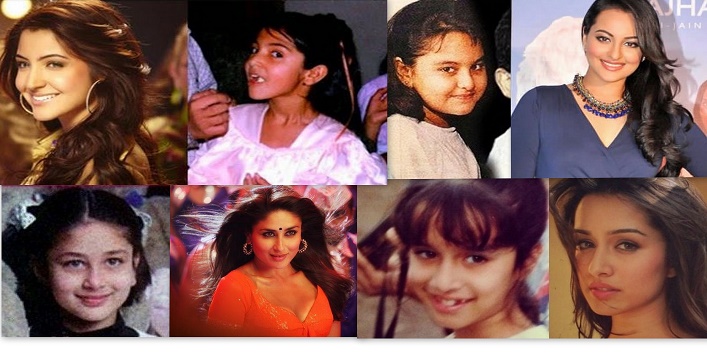 We Bet You Can’t Guess These 8 Bollywood Stars from their Childhood Pictures!

Babies are adorable! And if they are star kids, the world adorable is just not enough. The new brigade of star kids is ruling the Bollywood. The stars you can see now are stylish, sexy and what not. But do you know how your favourite celebrities looked like when they were kids?

Baby pictures are full of nostalgia and memories. Some of the celebs looked the same in their childhood and were easily recognisable. While some underwent serious transformation during their growing phase, that they are far beyond recognition. Check out the baby pictures of your favourite Bollywood and Television celebrities and tell us how many did you guessed right.

Can you guess who is he? His movie is all set to release next year and is the most awaited movie of the year 2017. Any guesses? He’s none other than the King of Bollywood itself! The Badshah! Yes, the one and only, Shahrukh Khan.

Keep going, there are many more stars to be guessed. The quiz has just started.

The other one is quiet simple. He’s famous for his machoism. People fondly call him ‘Bhai’. Salman Khan, the Sultan. We wish he could bring his cuteness back from his childhood.

This Indian actress has been trending on social media for her maternity fashion. Isn’t it too simple to deduce? Who’s the girl on the right?

Another hint: She recently gave birth to a baby boy! Kareena Kapoor Khan. Okay, we know internet is right now interested in seeing her baby’s pic not her baby pic! Who can this cute little girl can be? Her Hollywood movie is ready to be released next year and she will seen against Vin Diesel.

Such a give away, isn’t it? Deepika Padukone.

Deepika Padukone’s dimples were prominent right from her childhood. Who is the girl on the left?

Still no guesses? Let me give you another hint… Hint: She is famous for her least makeup looks and slender body type.

Anyone?
The Aashiqui 2 girl, Shraddha Kapoor. You will get the chance to see her on screen again in her next movie, OK Jaanu. Aditya Roy Kapoor will play the male lead in this movie. Let me tell you, this cute little Sardaar Ji is a girl! Too much cuteness in a single baby girl! This Sardaar ji is none other than our bubbly beauty Alia Bhatt!
So unrecognisable, isn’t it?

Another tough turn for you…

You can see the same naughtiness in his eyes. He has grown up to be a bubbliest Bollywood actor. Ranveer Singh! You’ve grown up to be entirely different!

Those eyes are still the same….magical! He’s none other than the Bunny from Yeh Jawani hai Dewaani! Our very own, Ranbir Kapoor.

Honestly, tell us how many did you get right? No cheating!