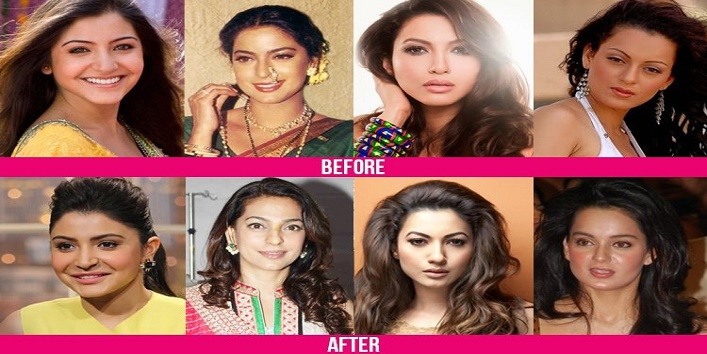 Why These 6 Leading Ladies of Bollywood Went for Surgery?

Going under the knife is a common affair in Bollywood. It is no longer seen as a disgrace in B-Town. Our actresses are never contented with their look and so they go on experimenting with their facial features to get the look they want. Many of them look even more beautiful after surgeries, but we are left to wonder. Where these idealistic beauty images of actresses will take us. Let’s have a look who and why decided to go under the knife for beauty.

1. Shilpa Shetty
Newcomers have been coming and going in Bollywood. But we can’t ever get over Shilpa Shetty. Remember her Geeky look in Baazigar? We were happy with the way she looked. But she wasn’t. She didn’t like her fleshy and hooked nose. She went under the knife after the movie. And so we can see it clearly. 2. Anushka Sharma
We all loved her in her debut movie Rab Ne Bana Di Jodi. There wasn’t a single thing about her that we didn’t like. Just before Bombay Velvet was out, Anushka shocked the world with her lips looking fuller and weirder. She has gone under the knife for plumping her lips. Although she rubbished the reports telling she only used a lip enhancing tool. 3. Priyanka Chopra
We love how Priyanka Chopra looks but we can’t overlook the efforts of her doctors to make her look this way. She opted for surgery more than once to achieve the look. She got a lip job done and then went for the nose job. She went for the lip job twice in her career. 5. Katrina Kaif
The Baar Baar Dekho actress didn’t look same if you saw her 10 years earlier. Her seemingly perfect beauty is not all natural. She went for the nose job and the lip job to become a prominent figure in Bollywood. In fact, the curves she has now have something to do with her medics.

6. Kareena Kapoor
There is nothing to be shocked about it. Kareena Kapoor did go for a surgery. Her chiselled jawline and cheekbones are made up. Though many people still like her for her previous attributes. Also Read: So This is the Secret Behind Katrina Kaif’s Hot Abs!