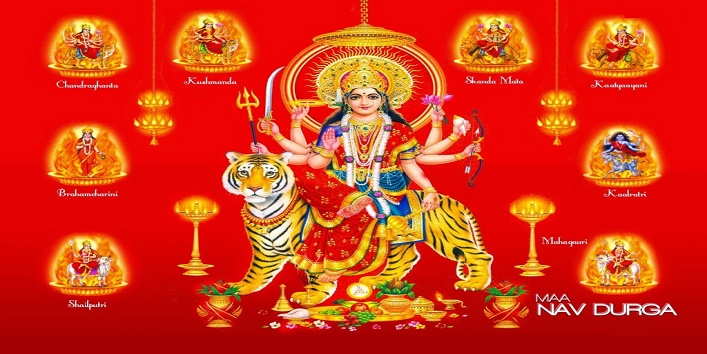 Navratri is a very special Hindu festival in which nine different form of Goddess Durga is worshipped on each day. Each day holds its own significance and it is believed by the devotees that performing different pujas and mantra offers them with happiness and prosperity. On the second day, Goddess Brahmacharini is worshipped. She is the second avatar of Navdurgas who took many rebirths to make Lord Shiva as her husband. Goddess Brahmacharini is also known as Uma, Aparna, and Tapashcharini. She holds a water utensil in her left hand and holds a rosary in her right hand. On this day, Hindu women fasts to achieve happiness, peace, and prosperity. On the third day, Goddess Chandraghanta is worshipped who is also known as Chandika, Ramchandi, and Chandrakanta. She wears a crescent moon on her head and shows her aggrieved look when she is provoked. Devotees of this Goddess believe that she blesses them with bravery and courage. On the fourth day, Goddess Kushmanda is worshipped and she is the fourth avatar of Navdurgas. It is believed that the darkness of the universe was ended by the godly smile of the Goddess and the beginning of new creation was started. On the fifth day, Goddess Skanda Mata is worshipped and it is believed that goddess blesses devotees with power, wisdom, and prosperity. She is also known as the Goddess of Fire. She is the sixth avatar of Navdurgas and she is also known as a Warrior Goddess. It is said that after killing Mahishasura, the demon she mounted on the lion given to her by Goddess Gauri. She is the seventh avatar of Navdurgas and she is known to destroy ignorance and removing darkness from the world. She is the violent avatar of Goddess Durga and it is said that she licked the blood of Rakta Beeja, who was a demon and had potential to create more demons from his blood. Goddess is the ninth avatar who is worshipped on the last day of Navratri and she believed to provide knowledge to her devotees. She is seated on the lotus flower with mace, lotus, conch shell and discus in her hands.